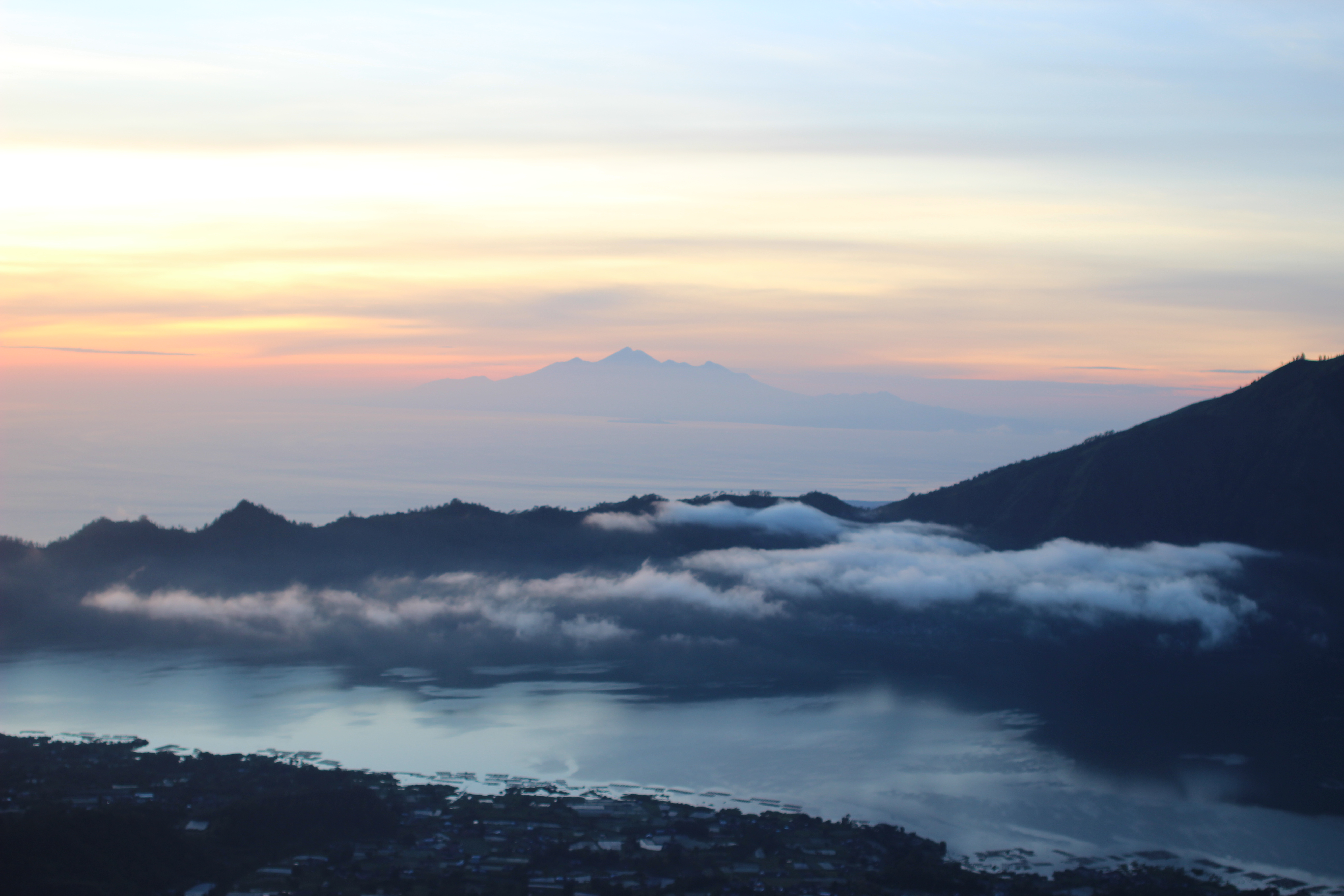 The Spirit of a Mountain

It was 1:30 AM when my alarm lanced the silky darkness of an Ubud night. Accustomed to interrupting my final sequence of dreams, I wasted no time in slipping into the second skin of yoga pants. With the watery beam of a cheap Nokia flashlight, I crept out of my dark sanctuary and into the rice paddies. Only two or three crickets occasionally pierced the veil of silence.

Others were already awake. In hushed whispers, we pulled half-eaten smoothie bowls out of the fridge, sharing whatever fruit we saved from the night before. The last stragglers wandered in, bags under eyes. Just a few hours ago we had danced in the glory of finishing our strenuous teacher training. Now, in the most fragile hours of the morning, we set out to climb one of the volcanos that hovered over our sweating bodies each dawn. Climbing it meant we could finally meet the distant white rabbit that peered down on us through the haze above the jungle.

Our van pulled into a giant expanse alongside at least fifty other vans, all swerving at odd angles in search of a parking space. Tourists chattered in the darkness, forming huddled groups in the surprising cold. The door of our van swung open with a sliding thud, and we stepped out, one by one. As an entourage, we found the nearest bathroom, a dark crypt sealed like the tomb of Jesus himself (and for good reason). Once we reunited ourselves in the mill of white tourists scented with preliminary sunscreen, the ascent began.

The earth was cold and grey, tendrils of faintly gold grass rising to shoulder level as the terrain delved into wilderness. Flashlight beams caught the shape of the winding path as pebbles became rocks, and rocks became boulders. The babble of multiple European languages dwindled to a murmur, a collective sound of heavy exhales accompanying the sudden steepness of the trail. An hour pressed on, and then another. I began to feel muscle fatigue tug at my hamstrings. I shouldered my camera, each step nearly forming a ninety degree angle as I pushed off one jagged rock and onto the next.

The chromatography of physical endurance separated us. I found myself with Caitlyn, a former marathon runner and fellow Zuna yoga graduate. Together we forged onwards, grasping for handholds in the frigid rock. As we ascended, the rocks changed. No longer smooth and spherical, they morphed into the dark shells of molten lava, a paradox of fluidity and sharp raggedness frozen by decades past. Like dancers they rose from the darkness, contorted shapes the last fearless expression of their volcanic ancestry. In the heightened spirituality that sometimes comes with a difficult hike, I knew, for a moment, that these rocks were still alive. With each cold embrace between palm and rock, I felt the spirit of the mountain.

We could see the peak of Mt. Batur with the first tinge of light seeping through the night. Caitlyn and I halted on a nearly vertical passage of rock, staring excitedly at the delicate red birth unfolding before our mortal eyes. The peak called to us, and with renewed vigor we climbed, anxious to see the alchemy of dawn from a higher vantage point.

At around the same time, warbling notes of a ukulele reverberated down the trail from somewhere just ahead. A mysterious voice followed it, stark against the clumsy joy of the ukulele strings. Still the never-ending throng of tourists moved ever onwards. From below, faces turned towards the light, towards the strange combination of melancholic voice and pliant string.

Finally, I could see him. He sat, dreadlocks coiled around his being, eyes smiling as he watched the white stream of tourists crawling upwards on hands and knees. From under a threadbare structure of wood that was more outline than shelter, he perched between two vast slabs of black rock veined with erratic manes of golden grass.

“And it’s whispered that soon, if we all call the tune,
then the piper will lead us to reason.
And a new day will dawn, for those who stand long,
and the forests will echo in laughter.”

Though his Balinese accent was strong, the words were clear. From his cocoon of mist and light, I felt his eyes catch mine, smiling their knowing smile. Could anyone else hear his words? Was this a dream?

“There walks a lady we all know,
who shines white light and wants to show
how everything still turns to gold.
And if you listen very hard,
the tune will come to you at last,
when all are one and one is all,
to be a rock and not to roll.”

I was much higher up as his voice trailed into the final, haunting ultimatum: “and she’s buying a stairway to heaven.”

I reached the peak of Mt. Batur a little quieter, a little less myself. Sure enough, dawn transformed the sky into colorful magic, glowing mist crowning mountain peaks with halos. Far below, a lake shone silver, low-lying clouds suspended above the glimmering water. Monkeys snarled at dogs and stole from tourists as an a frenzy of pictures and skimpy Instagram shoots took place. Somewhere a fire burned in a metal barrel, black smoke wallowing into the sky. The noise crescendoed, there was a sudden dew of trash glittering the same silver as the lake, and it truly seemed like Mt. Batur was erupting again, an orgasm of social media and plastic and temporary, screeching people.

Was this supposed to be part of heaven too?